V-‘Sirens of The Lambs’ : Banksy Makes a Statement on Day 11 in NYC.

Just when I thought I couldn’t have anymore respect for the faceless British street artist Banksy….now he has grabbed New Yorks attention with “Better Out Than In,” on Friday introducing “Sirens of the Lambs.” 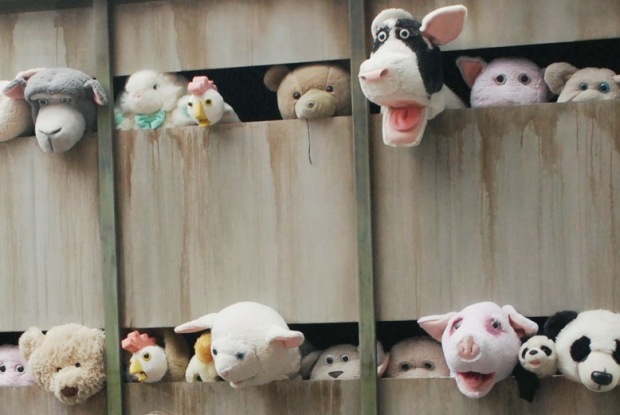 This brilliant bit of art in motion is  a slaughterhouse delivery truck filled with adorable, cuddly soft animal toys, squealing through the narrow boards of the truck.  True sounds made by real terrified factory farm animals on their way to slaughter.

This display on wheels will be “touring the meatpacking district and then citywide for the next two weeks,” according to the Banksy New York  website.

The “Sirens” video was has nearly 3-million views on YouTube as of today.  Check it out here.  The sculpture art will tour New York city for the next two weeks.  It appropriately started in the meat-packing district.

In order to run the slaughterhouse truck, there are four puppeteers dressed in black Lycra inside the truck, moving the toys, whose heads turn and mouths open and close. These are “60 cuddly soft toys on the road to swift death,” the website says.

SoberVeganLesbian brief rant:  F**CK! DA*MN! CRAP!!  SERIOUSLY???? I can’t believe I am currently in Los Angeles and missing the Banksy visit to New York!!!  I am seriously bummed out about this.  I might be forever damaged!

He also pulled a great one setting up a booth on the street selling his original, signed artwork for $60.  Most of the unknowing passerby’s ignored the stand, thinking they were knock offs.  But a few very lucky people made some purchases that could now be worth tens of thousands of dollars.  Lucky bastards!

Banksy, I would like to say thank you for your continued brilliance.  You may not show that face of yours, but you have just shown what you are made of…..compassion.  You are incredible, uber talented, and just plain awesome!