Last month my girlfriend, Jane, and I traveled to Prague and Vienna for 10 days for a little vacation. Wow, what amazing places. Beautiful and grand architecture.  Clean cities and parks.  Royal Palaces and castles that brought you back centuries.  It was a grand experience.  One I would highly recommend to anyone looking for historic and beautiful travel destinations.

Several people were asking how we planned to eat on this trip, being vegan.  The thinking here is that Europe, especially Central Europe, is not so vegan friendly.  This might be true, in that it is a big meat eating part of the world and meat does play a large role in meals served there. However, We did not find it hard at all to travel as vegans to Prague and Vienna. With the help of todays technology, like various Apps, and google maps, we had no trouble locating local vegan and vegetarian establishments.  And therefore, we made it our goal to only eat at such places throughout our trip.

We used a couple different Apps.  One known as Happy Cow, which directs you to vegan or vegan-friendly and vegetarian or veg-friendly establishments near you (using GPS) in any part of the world. Another one called Gogobot which is also great for finding nearby vegan establishments, among other things such as hotels, local entertainment, etc., wherever you are traveling.

In Prague we first ate at a lovely establishment called LoVeg.  It is located in the heart of Prague.  A really warm and welcoming atmosphere and great food.  Don’t forget to try the desserts here, should you visit, they are amazing!

Another great place we ate in Prague is called Lehka Hlava, which means “Clear Head.”  This place had a great atmosphere, with a snug yet comfy interior and very interesting decor.  The food was quite tasty. I had the coconut thai curry, which was delicious and oh so filling!

On our way from Prague to Vienna, we stopped for two nights in Cesky Krumlov, a medieval town that is straight out of a fairytale storybook.  Seriously amazing place of beauty, where you can really get a feel for what it was like living back in the days of castles and royalty in the Czech Republic. Kayaking down the Danube River was one of my favorite times of the entire trip.  So beautiful.  And quaint.  Like nothing I have seen before.

I wasn’t sure we would find a vegan or vegetarian restaurant in this super small village, but sure enough, happy cow and gogobot led us straight to a place called Laibon.  This place was great!  It had outdoor seating, right on the river.  The employees were so nice and welcoming. We ate there both nights for dinner, because we just couldn’t get enough. The first night we got a sampler plate to share, which was indian themed and was delicious.  The second night I got a burrito, and was in heaven.

We also found those naughty but oh so nice vegan friendly foods sold by street vendors in Cesky Krumlov.  Check out these delicious fried twisty potatoes on a stick… 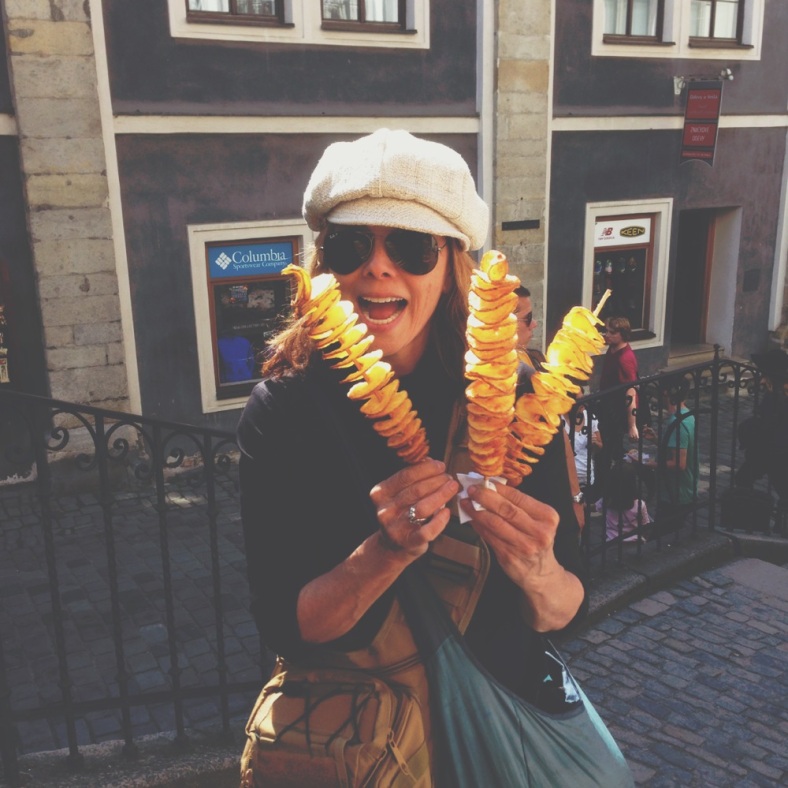 Next stop was Vienna.  Vienna was my favorite of all places.  Although it was a close 1st with Cesky Krumlov.  Vienna is simply beautiful.  Very easy on the eyes, most everywhere you look. The city is super clean, and the people are respectfully dressed, no matter what time of day.  It really is a wonderful place.  Also full of incredible history with the architecture and grandiosity to back it up.

We had no problems finding vegan establishments in Vienna.  Our biggest trouble was finding our way to the eateries through the streets of Vienna.  But that was much of the fun on this holiday.  Going to local Vegan/Vegetarian restaurants lead us off the beaten tourist path, which was fantastic!

One place we frequented twice in Vienna was a little ice cream eatery called Eis Greissler.  This place seemed very popular among the locals and tourists, as there was always a line out the door.  It was a sweet little storefront with many vegan options for ice cream.  The flavors were awesome and I felt zero guilt when eating this dessert!  I had the almond and chocolate and strawberry flavors while in Vienna.  Can you say Brain Freeze! 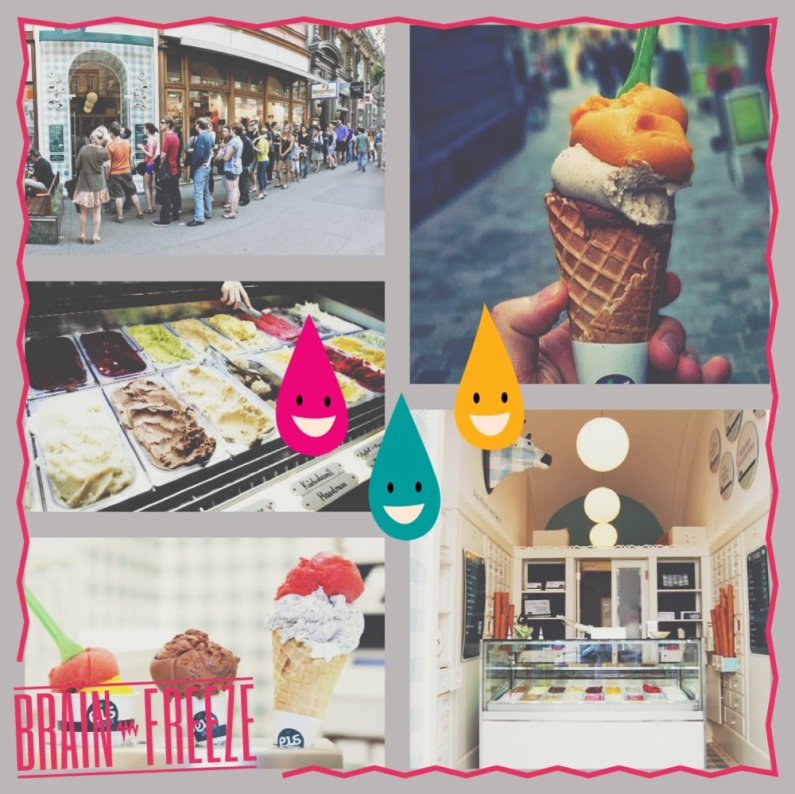 The next place we visited was called Makro 1.    This place was rather unique.  It has one menu item, that changes daily.  It is a vegan, macrobiotic establishment.  Very small, homely place, with outdoor tables.  The inside is the kitchen, and a small store, and one large community table. The food tasted like homemade goodness.  Healthy.  It hit the spot and prepared us with energy for a day of walking around Vienna.

Tian was to follow.  Now this restaurant is super fancy and really worth the experience.  It is a vegetarian restaurant with vegan friendly options.  Tian is a real proper establishment, equipped with staff wearing white gloves, who are constantly switching out your utensils for new, clean ones.  I felt a little royal.

The entire lunch took about 2 hours, as each course is prepared fresh, and thus takes more time than most restaurants. Truth be told, I am not really sure what I was eating at this restaurant, all I know for certain is that is was vegan food, very decorative and well thought out, and incredibly tasty.  The desserts were mouth watering.  We shared a brownie and strawberry dumplings.  I would highly recommend going here, should you ever be visiting Vienna.  It is a beautiful establishment, with unique food, and very friendly, proper staff.  Just be sure you are not in a hurry when you go. 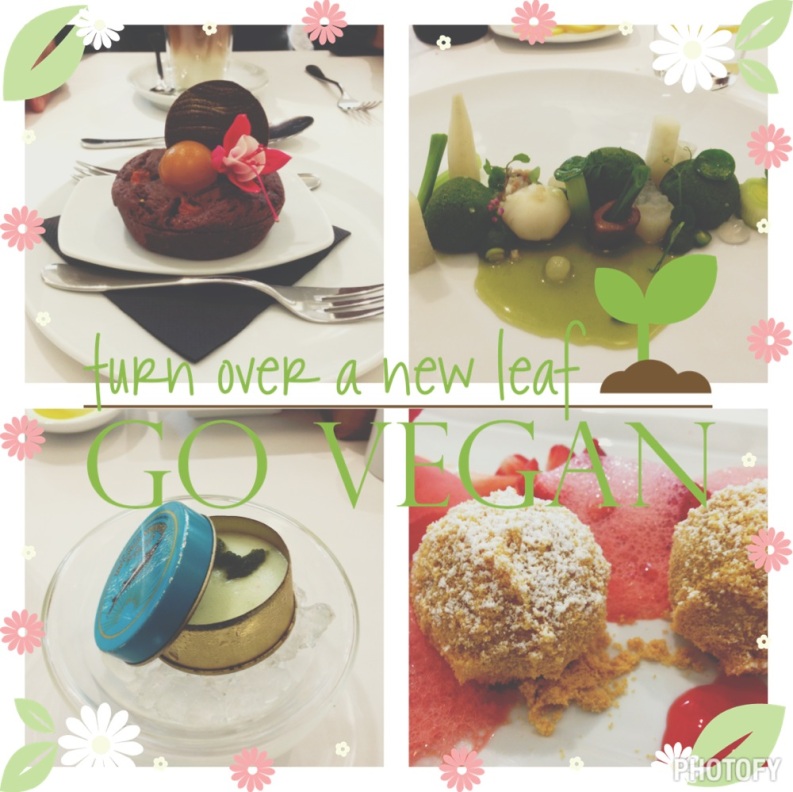 The last place we ate at for a meal in Vienna was a cafe called Deli Bluem. This cute little place was very much off the beaten tourist path in Vienna. It was so great to see real Vienna, not just the tourist center. Deli Bluem is a small-ish cafe, with a buffet style menu. Not like those horrible American all you can eat buffets, rather a few choices behind the counter from which you create your meal. They also have tasty desserts. we had a brownie and an apple/peach pastry. Both were delicious.

And last but not least…more dessert!  This was an adorable little storefront bakery called Easy Going Bakery.  This sweet little place offered several vegan mini cupcakes to choose from.  Of course we had to try every vegan variety.  After all, we were on vacation!  🙂

So, for anyone who feels it is difficult to eat as a vegan when traveling, Im proof that your belief is false.  Being vegan is far from difficult.  It is easy.  But more importantly, it is a healthier, evolved, and compassionate lifestyle that can be found anywhere in the world.  I urge you to give it a try.  Make a positive change in your life.  Be creative with food.  And live a guilt free vegan lifestyle!